I have struggled to put into words my experience this year at the Cellcom Green Bay Marathon. Leading up to this event my emotions were all over the place.  This was suppose to be a fun, laid back run with friends but after a disaster of a training season in winter and an uncooperative body (trocantor burstus) I was lacking miles and confidence. I was honored to be selected as one of the Tundra Trailblazers for this race and enjoyed documenting my experience preparing for race weekend.  To be perfectly honest I thought the build up would go differently. In my head I pictured training to be magical and runs to be effortless.  Heck, I have done this before how hard could it be?!?!? Freaking hard!  Set backs continued to pile up and my vision of perfection was dashed.  At the time each blow felt awful and soul crushing.  My once confident attitude that was built over years of running was beginning to fade.  I have been chasing a goal to complete 40 marathons or ultra marathons by the time I turned 40 years old. 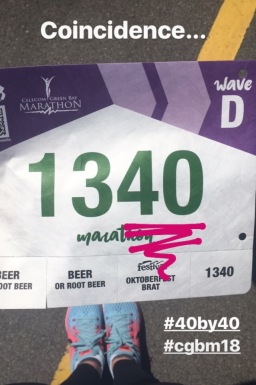 Completing the first 38 was easy-peasy and I intended to have the 40 completed well before my 40th birthday May 31, 2018.  To say things did not go as planned is an understatement and come April I was starting to panic that I would not accomplish my goal that was now 10 years in making.  Apple Creek 50k became #39 in my quest, which left the Cellcom Marathon as #40. Like I said before, I totally thought I would have put this goal to bed well in advance of Cellcom so it did not bother me that the 2 races were a week apart. Now that things were down to the wire finishing the Cellcom Marathon was a matter of not only pride, but completing my 40 by 40 goal…no pressure!  To add to the mix I had looked for a “back up” marathon just in case Cellcom did not go well and I could not finish…yep, nothing in WI for the following weekend. Which meant I was all in for Cellcom, come hell or high water I had to finish to complete my 40 by 40 goal. 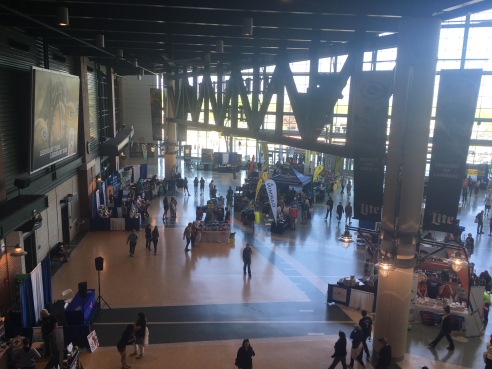 Race day was here before I could blink and I was nervous.  It doesn’t matter how many races that you finish it is NEVER a given that the race you are about to run will go as planned. The day was beyond perfection for a finish.  It was cool, which is not normal for Cellcom. The past few years were so freaking hot, like running on the sun hot.  One of my favorite things about Cellcom is all the individuals that there are so many awesome people that I run into. It is like a big party before the race even starts. This year was no different. I was able to chat with old friends and loosen up before the coral I was in moved up.  As we started off there was a sense of calm that came over me. Today felt good.  As the miles flew by and the race unfolded I tucked in with the 4:45 group. I did not have any expectations for this marathon. My goal was to finish.  I expected to fall back at some point. I had not run a marathon under 5 hours in over a year.

Rounding the corner into DePere we started up the hill towards my husbands office building. I knew that my family was going to come out to say hi, but I did not expect to see them so early in the morning.  It was a welcomed surprise to see my girls with signs cheering me on. My family has always supported my running efforts and sharing this milestone with them was super special. After hugs and pictures I headed back onto the course. The miles felt easy, which typically means the wheels are going to fall off at some point. I was hesitant to push harder and worked to keep my pace even while remaining smooth.  The half way point snuck up on my.  I was truly having a ton of fun!  I also had caught back up with the 4:45 pace group. I stayed with the group for several more miles until we hit downtown Green Bay.  A runner in front of our group fell really hard.  The pacers I was with had to keep going, but I stayed with the gentleman that had fallen.  He was banged up pretty bad but refused medical aid.  He got up and we walked together for a few blocks to make sure he was okay.  By this point the 4:45 group was approximately 7 minutes ahead of me at this point. Knowing that the runner that took a tumble was going to continue on I said goodbye and took off.  I picked up my pace with zero intention to catch up to the 4:45 pace group. There was still a lot of race to run.  Coming up to the City Deck we turned back towards the Stadium and had to cross the bridge.  This bridge took me down last year. To cruise over it this year was unexpected and awesome!  Hitting the bottom of the bridge I saw the pace group…shit I had almost caught them.  Game on. I took off and caught back up.  This gamble could have gone badly we had 8 miles yet.  It was so worth it though, this group was fun. The conversation helped to pass the next few miles.  Fueling up with my last gel I felt too good. I know that sounds weird, but if you feel good with 6 miles there comes a time to make a decision to go for it or play it safe.  I decided to go for it. I picked up my pace and broke from the pace group I had traversed with for the majority of the race thus far.  My goal was to stay in front of them and drop whatever I had left.  It felt like I had blinked and we were heading into the Stadium (my favorite part).  I got really choked up as I passed the place that Derek and I got married (he is a super Packers fan so we exchanged vows at the Lambeau).  Out the tunnel and back onto the pavement it occurred to me the race was almost over and I didn’t want it to end. At that moment I stopped. Like legit stopped moving. People began to pass me and time felt like it stood still.  I took a deep breath in and savored all that had brought me to this point.  A few tears began to well up in my eyes…NOPE! I was not going to ugly cry, yet. I started running again as I saw the clock by the finish I had to take a second look, what?!?!? I did not expect to finish with this time or feel so amazing.  Winter rough, my training suffered, my confidence was shakey…none of that mattered. I ran and felt free. Not all races will be this awesome, but today was my day! My goal of 40 by 40 was realized.  As the medal was placed around my neck the tears poured out of me. I cried and cried and cried.  Derek and the girls met at the finishers party. BEST. DAY. EVER. 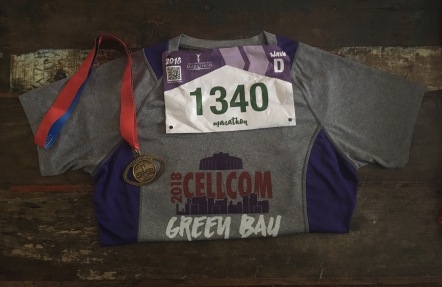 So now what? I have no freaking clue and that I am good with.  Summer will be my 1st break, like for real break with zero goals or expectations. I’m ready.